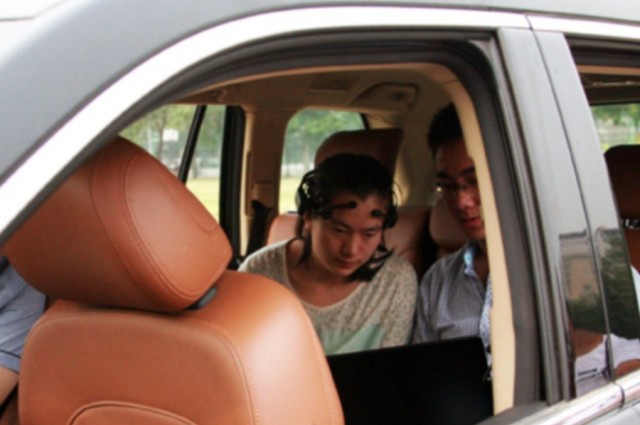 The headset comprises of 16 sensors which capture EEG (electroencephalogram) signals, the type automatically generated by the brain. As an idea is generated, billions of neurons inside the brain “fire,” and send electrochemical signals to one another via synaptic connections. Ions (electrically excited particles) which are exchanged between neurons will move in waves all throughout the brain. Some of the ions eventually will get to the scalp, whereby they’ll push against a headset’s electrodes.

If during this point you might be entertaining the thought that devastating traffic accidents might be caused by daydreaming, distracted drivers, don’t panic: the scientists report that a driver only would have to focus while doing something such as changing lanes or turning. As a matter of fact, the mind-controlled automobile at present only is able to drive backwards or forwards – it cannot turn, whatsoever. Therefore, if you are prepared to drive in a straight line for the whole journey, it’s the right car for you.

However, at present, there aren’t any plans to mass produce the interesting collaboration between the Great Wall Motor auto company and the university.